What do you think of when asked about your favourite part of a game?

Is it the depth and emotion of the story? The slick and responsive combat? Exploring a world, playing with friends, earning new gear…?

I jumped into Sea of Thieves recently and discovered my own answer to that question. 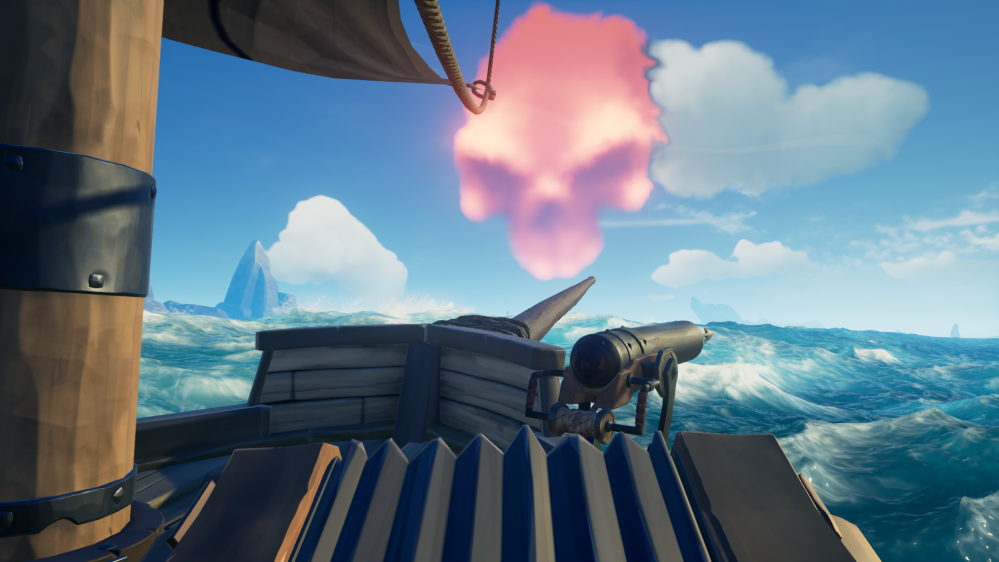 Here at Universally Speaking, we’ve been looking at various titles to play together during lunchtimes, aided by the incredibly convenient Xbox Game Pass which turned up Sea of Thieves as our first choice.

For those who may be unaware: Sea of Thieves is a shared-world pirate-themed action-adventure game developed by Rare.

You get a ship to manage (helm, sails, cannons, harpoons – the works) which is mixed with the natural chaos that emerges from having each of these things managed by the friends, family, and co-workers you’re playing with.

Sea of Thieves can be treated as a ‘serious’ co-op experience with an explicit structure of goals to achieve, or you can simply use the framework of the game as a good way to just hang out without any particular demand on how you engage with it.

The vibrant, eccentric visual style is wonderfully goofy and the physics are truly something to behold. Watching one of your shipmates load themselves into a cannon and shoot over to another ship or an island… only to completely miss and soar right over it – that is a novelty that never wears thin! 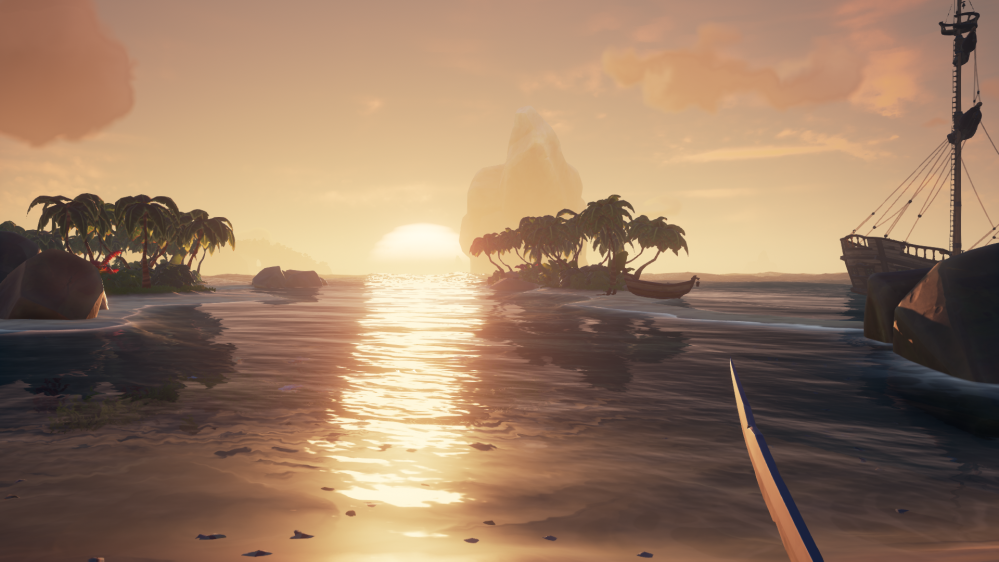 Sea of Thieves is very much the kind of game where you tell your own stories. It lays out the world, puts all the tools at your disposal, and lets you raise the anchor to set sail wherever you want.

Experiencing this game in hour-long chunks during lunch has been a really fun way to engage with the game. We get our voyages, head out to the open seas to complete whatever mission strikes our fancy, encountering various obstacles throughout (enemies, other players, undead vessels, world events, fortresses, the occasional kraken – the usual!) and return to collect our coin.

Then begins the decision-making process of how we spend our gold to upgrade our ship, equipment, characters, and so on…

At least, this is how it works in theory.

The reality has involved our voyage being cut short by questionable decisions being made to boldly pursue another ship, only to discover a third vessel tailing us who swoops in to deliver the pain to us in a suitably epic encounter. 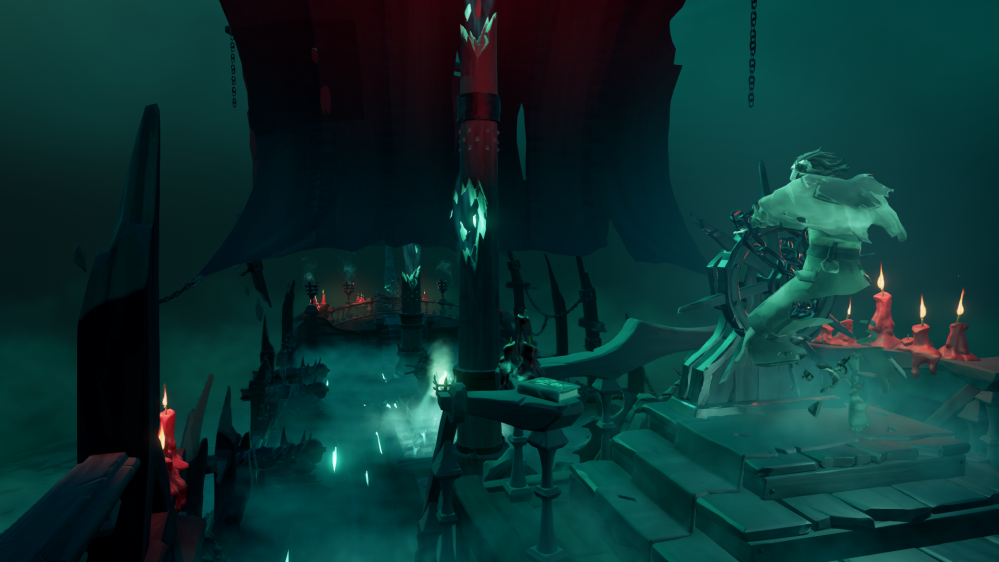 Music and sound are pretty important in video games. That, I think, is a pretty unanimously agreeable statement.

Turn off the music and sound in any game (any text which utilises these things) and your experience will change dramatically. Next time you play a game with audio options on sliders, switch off the sound for ten minutes and see for yourself how different it feels.

You realise just how integral this for how it work to unify of all the other design aspects into something cohesive.

We often anticipate the dramatic swell of music that informs us we’re about to enter combat in a lot of shooters, but something that’s perhaps less obvious is in the Gears of War series where the end of combat is marked by a specific sound effect – informing players that all enemies in the area have been eliminated and the encounter is over.

As part of its extensive suite of accessibility options, Gears 5 supports players who may be hard-of-hearing or deaf by implementing this sound effect in the subtitles.

Metro: Exodus offers a similar feature where the subtitles can inform players of what noises a creature makes in the environment and approximately how many metres it is away from the player.

Music and sound are integral parts of our lexicon for understanding and engaging with games, which is another thing that Sea of Thieves puts in the hands of the player in a really fun way.

At any point, players can pull out a musical instrument – cycling between a banjo, drum, concertina, and hurdy-gurdy – and play a shanty.

It turns out that this is one of the best ideas in the game! If multiple players pull out their instruments, regardless of which, they’ll sync up their tunes and play the same shanties together.

There’s a sense of camaraderie in this. As soon as one player starts playing, another is sure to follow. It can take a while to travel from place-to-place, so this provides a good distraction during the downtime of your voyages.

If you’re intoxicated from drinking too much grog, you’ll play out-of-tune until you sober up. And if you play while encountering a snake, it’ll be entranced by your tunes and won’t attack.

Beyond that, it’s also a great way to communicate with other players in the world.

Pulling out a banjo instead of a blunderbuss can positively signal your intentions to those you encounter on the high seas.

Sure, they may fire on you regardless (particularly if you’ve got a lot of loot, or a nice ship that they think would look even better decorating the ocean floor), but that’s the nature of emergent, player-driven experiences such as this. There’s a genuine sense that anything could happen whenever I’ve booted up the game, I’ve very much found that I get out of the experience what I put in.

While the aesthetic of Sea of Thieves is everything pirates, there’s some wonderful layering to the gameplay through its non-violent options for interaction which makes the game stand out among its (admittedly few) peers.

Sea of Thieves is a swashbuckling sandbox experience that’s been a joy to play, and now is the best time to jump in if you’ve been away for a while, or if – like me – you’re late to the party.

This week has seen the release of the ‘Crews of Rage’ update which adds a mysterious new chest, new appearance options, new bounties and voyages, new achievements, improvements to accessibility, and much more. 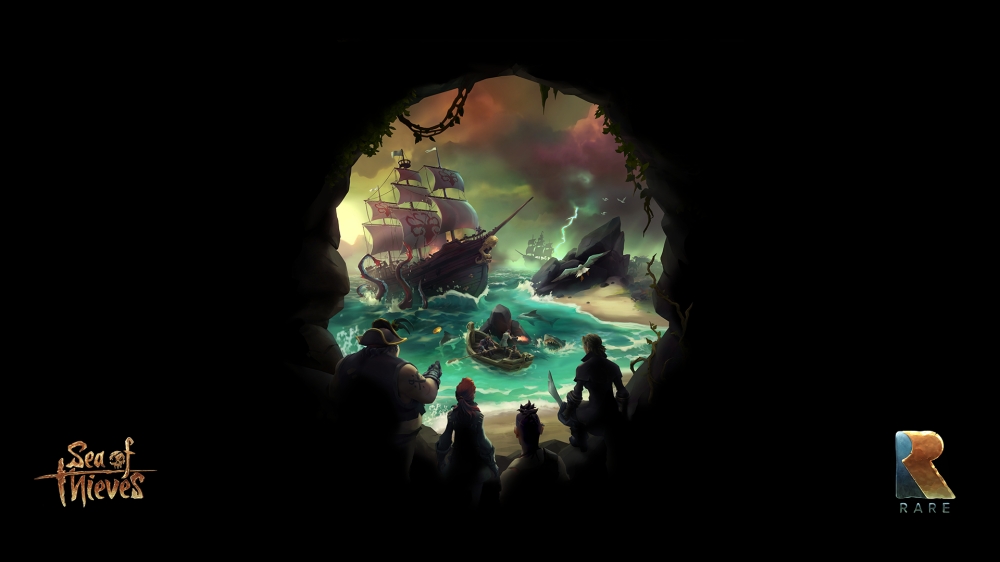 Sea of Thieves offers the essential pirate experience, from sailing and fighting to exploring and looting – everything you need to live the pirate life and become a legend in your own right. With no set roles, you have complete freedom to approach the world, and other players, however you choose.

Whether you’re voyaging as a group or sailing solo, you’re bound to encounter other crews in this shared-world adventure – but will they be friends or foes, and how will you respond?

Sea of Thieves is available on the Microsoft store for Xbox One and PC.

One thought on “Why the best part of Sea of Thieves is its musical instruments (please help, I can’t stop hearing sea shanties!)”