Meet the incredible women who work at Universally Speaking!

(well most of those who made it for the photo) 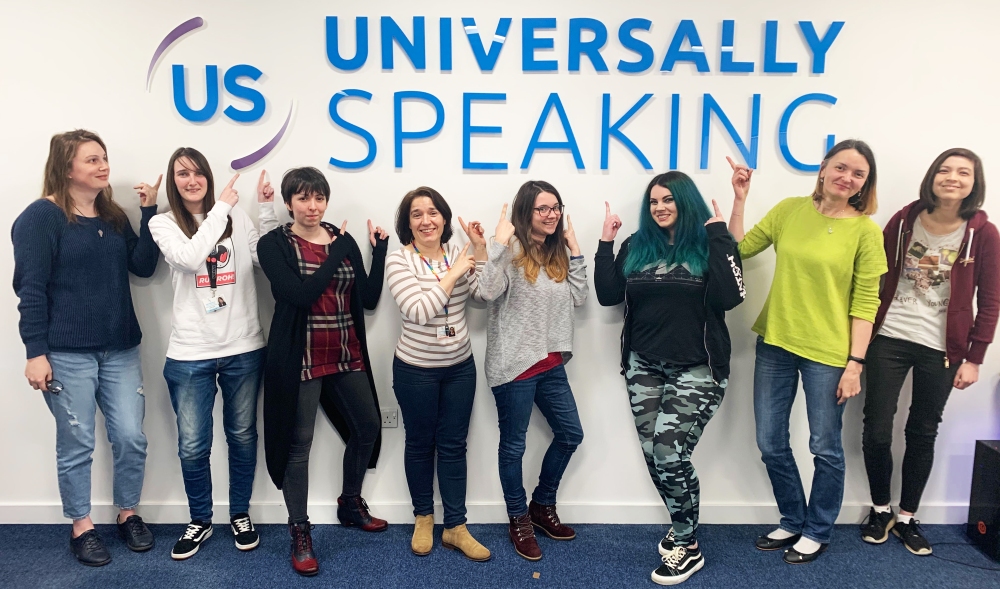 We ARE the future!

We represent women from different countries, different educational backgrounds, different job histories. The point of this article is to show off the talent we have here and to encourage whoever is reading this not to give up getting into this incredible industry we love!

As we celebrate International Women’s Day we have 4 talented women who have taken time out their day to tell us more information about them!

What are your job titles?

Where are you from?

Tania: Italy, but I live in Cambridge

Tara: All over the place but I guess Runcorn

How long have you been at Universally Speaking for?

Chloe: Five and a half years. I started in August 2014 as a QA Intern and then progressed to QA Lead in April 2015

So who inspires you the most in your life?

Natalia: Creative women who had a strong will to follow their dreams like Agatha Christie and Joanne Rowling

Chloe: I would say my parents are a big inspiration, they’ve always supported me with my decisions and choices with education and work

Tara: My brother, he just kind of knows what he wants and goes for it and I like that determination.

What is your biggest personal achievement?

Tania: Completed my MA whilst working and being able to pay for it all by myself

Natalia: It isn’t my biggest but I most recently achieved completing a Storytelling Course

Tara: Completed my degree in Games Art Design with a 2:2!

Do you have any advice for younger women looking to get into this industry?

Natalia: Be interested in people. Computer games are not just about computers, they’re about the gamers!

Chloe: Don’t be put off by being a minority within the industry. When I was at University, I was the only female on my course for three years, and that drove me to prove myself and the others on my course that I deserved to be there and the games industry was suited for me.

Tara: Just keep trying and eventually someone will give you that chance. It took me 2 years of applying for jobs every day. I worked in retail for 8 years. Get all the experience you can possibly get/say yes to every opportunity (Unless its unpaid because you’re worth more than that, never do anything for free).

Why the games industry?

Tania: I like working in an industry that creates entertainment, especially for young people. The world right now is a pretty gloomy place and we need to escape from it sometimes. I like helping people do that.

Natalia: It is interesting as the team is international, you have to learn new things every day, there is always room for development as the computer games market is versatile and has great potential.

Chloe: I’ve always played video games for as long as I can remember. I was given a PlayStation One for Christmas when I was five, and I haven’t looked back. It started of as a hobby which I enjoyed alone and with friends, but as I became older and started to think what sort of job I would like to do, I thought “Why not games?”. So, I got myself into University on a games course, finished that and then applied to become an Intern here at Universally Speaking in 2014.

Tara: I love gaming and the people involved in this industry have ended up being super kind to me every time I met them. I wanted to get a job that I was motivated to go to in the morning, that I wanted to make a difference in and get my name out there.

What are your personal goals in this industry?

Tania: hmm, I think I need to be in the industry for a bit longer in order to establish my goals

Natalia: To become a true professional and learn all the processes RE games creation and localisation

Chloe: Continue to watch the industry grow and be a part of that within the QA sector

Tara: My ultimate goal is to work for gaming events make gaming an enjoyable and accessible thing for everyone. I have a creative outlook on life and if I can use that to make boring events a laugh then I will!

Favourite videogame of all time!

Natalia: Not found mine yet

Chloe: Tough one as I’ve enjoyed lots of different games at different ages. Red Dead Redemption is up there, along with Grand Theft Auto: San Andreas, and Disney Hercules PS1 game.

Tara: This is a hard pick but I will have to say Final Fantasy 9.

According to IGN, in 2017 the amount of women in the gaming industry made up only 22% of the total which is just awful. Gaming is for EVERYONE and it is so important that women become a larger part in the process of making videogames.

USCGames claim that 48% of women in America are gamers, so why aren’t there more in the industry? There’s no real logical answer, but have no fear, we are on the rise.

Washington State university believe that by the year 2040, 30% of CEOs are going to be women and that idea excites me more than anything.

We are slowly making a difference everyday, we now currently stand at 28% of women being in the Gaming Industry according to UKIE and we are only going to increase that number.

Here at Universally Speaking we are continuously striving for equality and revel in the overwhelming talent diversity and unity brings to not only our company but the sector as a whole.

Be the change you want to see in the sector.